Adoption Rights Alliance is calling on all General Election candidates to sign a pledge to commit their support for equal rights for adopted people.

Irish adopted people have no explicit statutory right to access their birth certificates or adoption records.

Birth certificates are public records and adopted people are the only Irish citizens discriminated against in this regard.

Successive Irish governments have failed to provide adopted people with the right to their personal data.

Adopted people are not demanding the right to a relationship. They are simply seeking the same rights to their personal data as every other Irish citizen.

what can i do to help?

Click here to download our two-page flyer which has the election pledge on the front and  ‘Adoption Myths and Facts’ on the reverse side.

We encourage you to print this document and ask election candidates to sign the pledge.

Click here for a briefing note on information rights (which includes our objections to the Adoption (Information and Tracing) Bill 2016.

Draft Adoption Information Bill
In November 2019, ARA circulated to TDs and Senators a Draft Adoption Information Bill, which is an amended version of the Adoption (Information and Tracing) Bill 2016 (as initiated). The amended bill was drafted by Dr Maeve O’Rourke and Claire McGettrick of ARA, with assistance from Dr James Gallen and Máiréad Enright, and implements the various amendments we disseminated previously, and also incorporates additional child-centred and human rights oriented measures to create the attached draft legislation.

ARA had previously indicated that it would reluctantly support Option 3 of the pathways set out by Minister for Children, Katherine Zappone. The amended legislation was shared in the spirit of clarifying what we see not merely as workable legislation but best practice law for all those affected by adoption.

Legal opinion by O’Mahony, Logue and O’Rourke
In this context we also circulated a legal opinion published by " target="_blank" rel="noopener noreferrer">Dr Conor O’Mahony, Dr Fred Logue and Dr Maeve O’Rourke. The opinion was also endorsed by a number of leading legal academics, which indicates that the attached ARA draft bill is constitutional.

Adoption Rights Alliance Information Guide for Adopted People
In the absence of explicit statutory rights, ARA and its predecessor organisations have, since the 1990s, provided rule-abiding information and resources to assist adopted people and others affected by adoption in locating their birth certificates and obtaining adoption records. Recently, ARA published an updated Information Guide for Adopted People, which incorporates recent developments in DNA genealogy and the introduction of the General Data Protection Regulation. Over the past three decades adopted people have used these methodologies to obtain their birth certificates. We encourage you to make this Guide available to their constituents.

Click the thumbnails below for image versions of the General Election 2020 flyer. 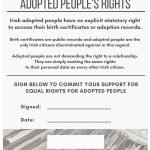 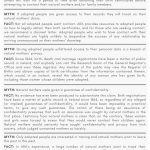 We are grateful to Fiona Ward and Brian Lockier for the use of their photographs on this website. Photographs may not be reproduced without permission.